When a prime spot opened up on West Edmonton Mall’s Bourbon Street, it seemed like the perfect place to serve up burgers, beer, and sports. The new owners asked Habit to create an influential brand that would be a slam dunk in Edmonton’s dining and hospitality market.

Develop a brand for a new restaurant that focuses on burgers, beer, and sports.

Part of the reason we chose the circle background is because the logo looked even better when we applied it to a container with the same dimensions. We used that application in our ads to promote the menu with top-down shots of a burger bun or a plate of hot wings. But the great thing is that it doesn't just work for food. The logo can be placed on top of a hockey puck, a soccer ball, or a top-down view of a glass of beer to promote 1ST RND's other focuses.The logo mark is a clean (not to mention literal) example of a round. It's also a visual tie-in to a lot of sports, like baseball, basketball, golf—anything where a round object is the focus of attention. The bright colour palette is energetic and exciting, and it's strong enough to hold up condensed heavy typography, which has the same look as traditional sports lettering.The phrase "first round" is a household term in the world of sports. It can refer to league drafts, the start of playoffs, or the beginning of a specific event like a boxing match. But it's also a common phrase for restaurants and bars: an evening out always begins with the first round of drinks. That's how we ended up with 1ST RND.The creative team sat down to brainstorm the restaurant's name. It didn't take long to realize that we needed a name that identified with sports in general without being tied to a specific sport, which would limit its appeal.

Even before we started on the logo, we though about how the concept would speak to its customers. It was important—both to us and to the success of the brand—that when 1ST RND was speaking, it was in the same language as a true sports fan.

We crafted the messaging to include as many sports references and idioms as we possible could. The end result was dozens of lines and sayings that could be used for regular promotions or general branding. That language was worked into the website, menu, and other applications.

Our favourite part of the process was brainstorming the names of menu items. They needed to be clever enough for the average sports fan to appreciate, but they also had to clearly communicate what the item was if someone didn't understand the reference.

Goal Tenders
Our house-made chicken tenders and house fries are the Highlight of the Night! Served with plum sauce.

We carried the theme even further by creating tongue-in-cheek "leagues" as menu titles.

The most successful startup leagues since the XFL:

We built the website, 1STRND.ca, on 1ST RND's three main features. On the home page we used enticing photography and descriptions of the big three, marking 1ST RND as a champion in every league. And each focus got its own page with content specially geared toward burgers, beers, or sports.

We created the responsive layout to make the user experience better on all devices. For the desktop users we added a few extra features to really enhance the web experience. Users can assemble their dream burger with our BYOB tool or explore wing flavours with the colour-coded Heat Meter for sauces and rubs. We even built the framework for an RSS-sourced news feed to keep fans up to date on the latest news in the sports world.

Working with CK Designs, we expanded our vision of the brand into the restaurant itself. Huge sports photography on the walls drew people into the history of sports with timeless, universal images. We deliberately chose images that wouldn’t be controversial or feel dated. Everyone can identify with a young Gretzky holding the Stanley Cup or with Vince Lombardi being carried by his team after the 1966 NFL Championship.

We also created multiple composites for the glass bulkhead exterior and the washrooms to support the brand even further. 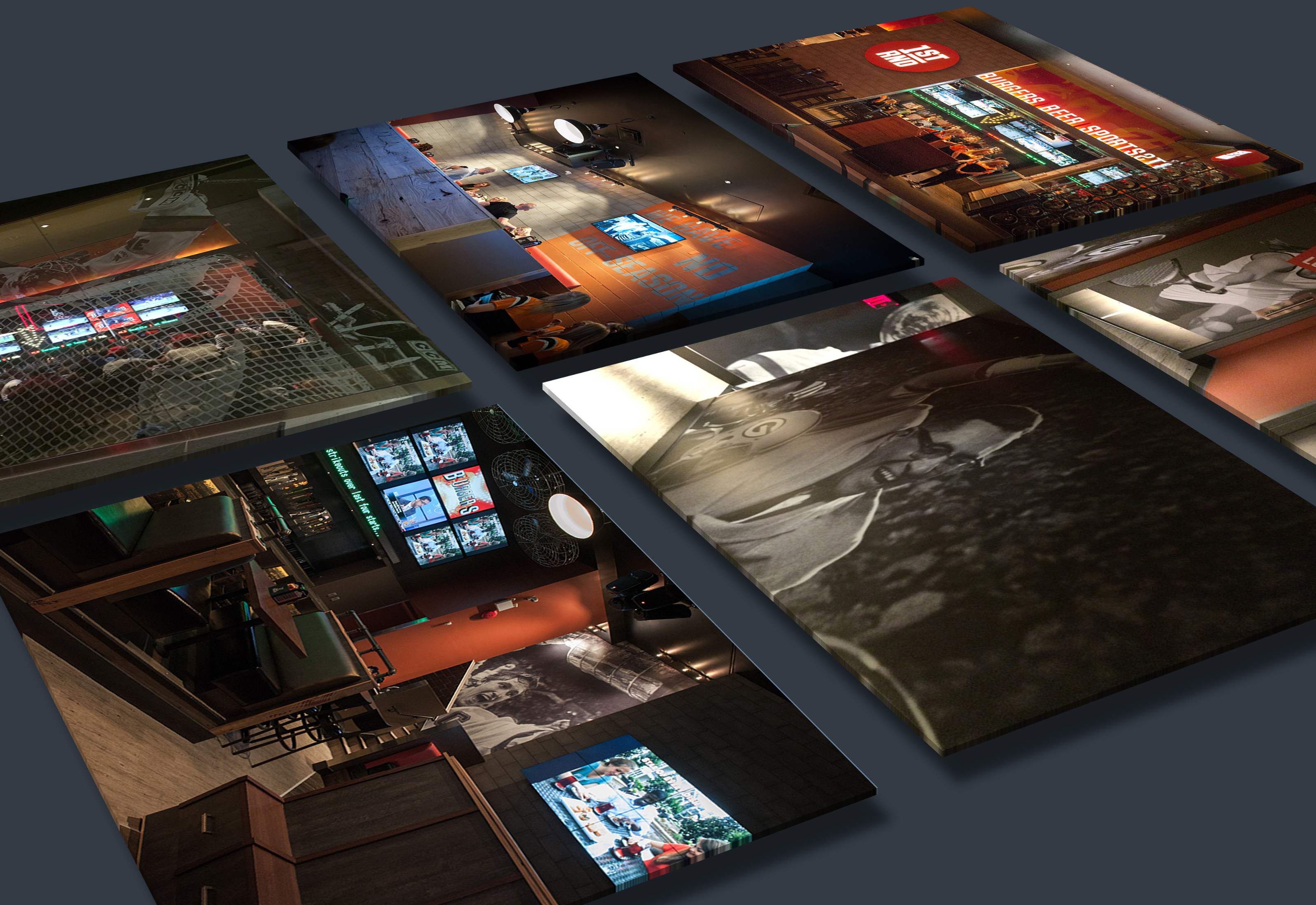 After the logo and website were in place, we rounded out the rest of the brand. This meant designing everything from menus to interior animations to a launch campaign that introduced 1ST RND to Edmonton. 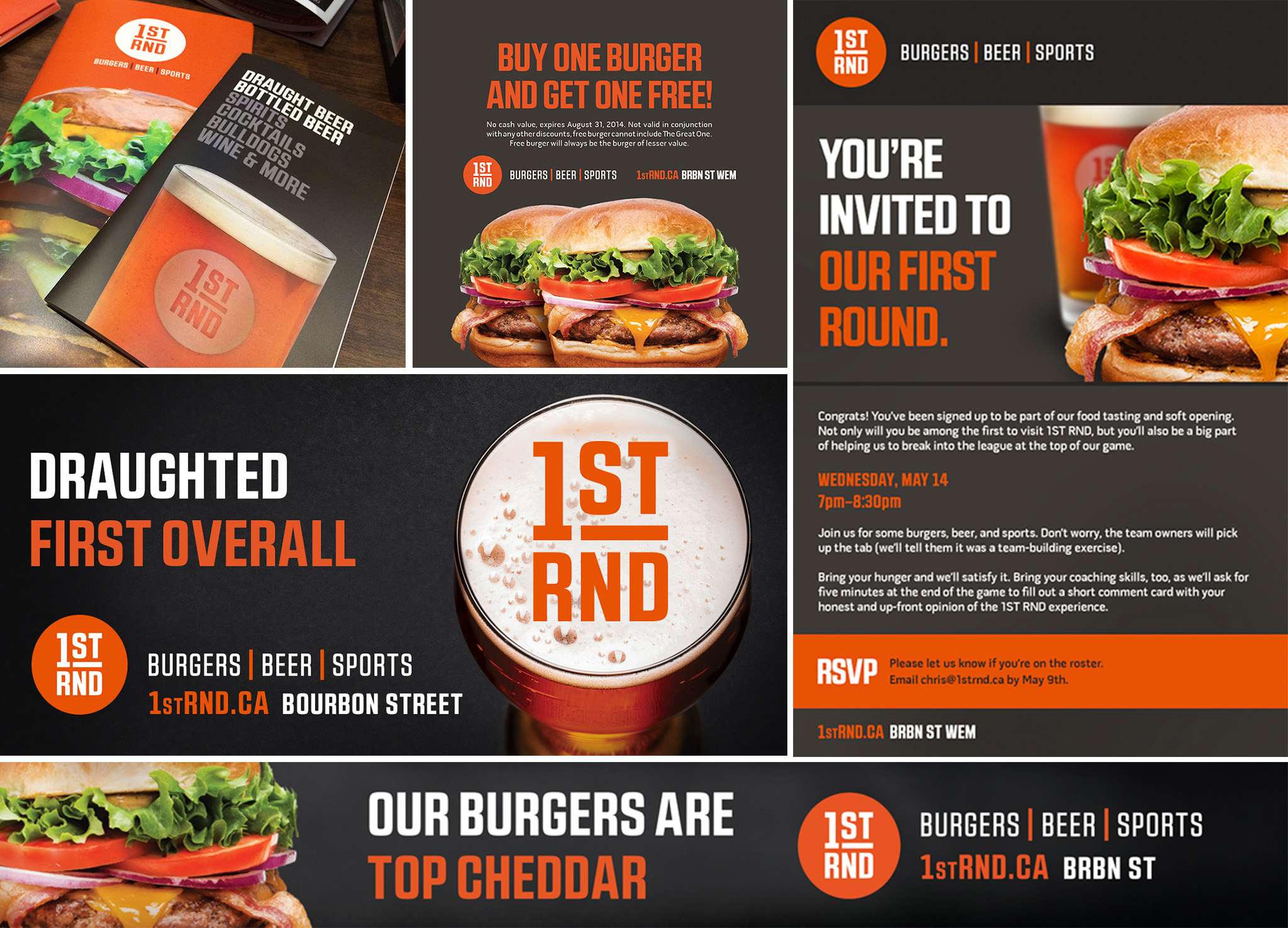 To fans, sports is more than just a game. It's a ritual. A calling. A bond between friends and strangers alike. There's no better way to experience it than in the presence of good company. And whether you're a player or a fan, the path to a championship always begins with a first round.